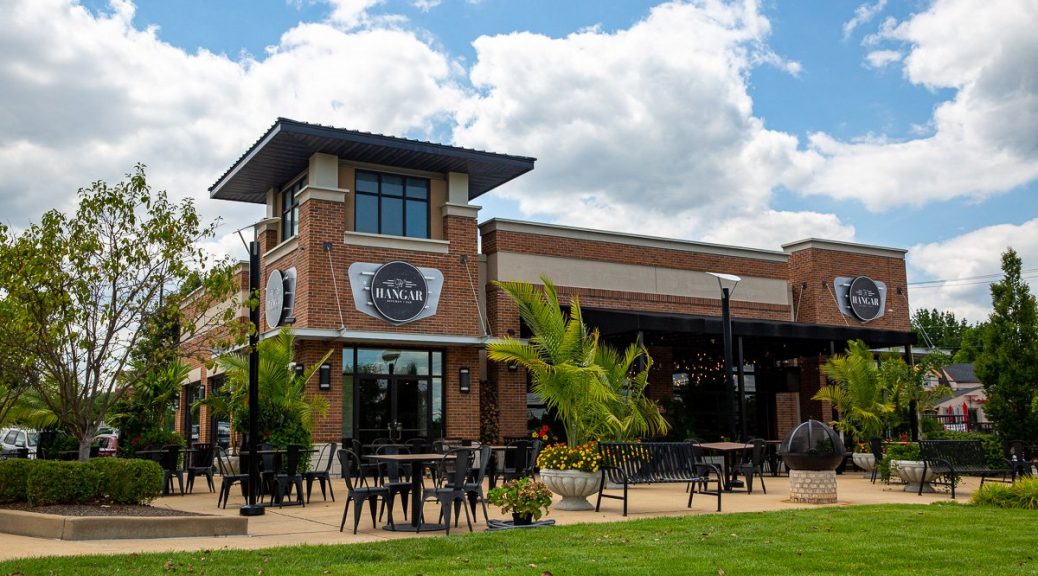 With its sprawling patio, the aeronautically themed restaurant will open in the former Slider House location at the corner of Manchester and Rock Hill Road. 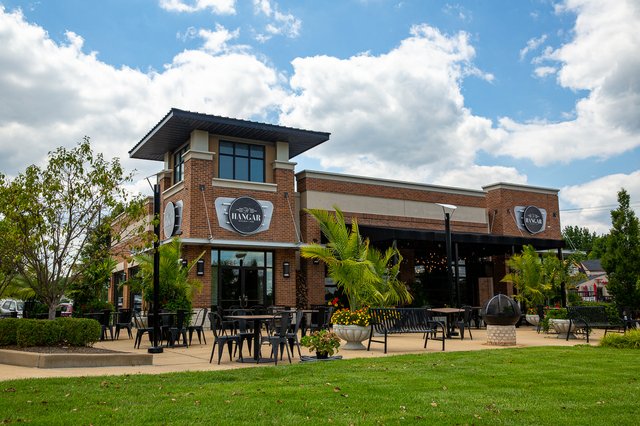 PHOTOGRAPHY BY KEVIN A. ROBERTS

After a long, slow approach, it’s wheels up for Hangar Kitchen & Bar, the airplane hangar–themed restaurant with an eclectic menu. Hangar (which also gets its name from the owners’ vodka preference) is opening in the former location of The Slider House, the city’s first slider-based eatery, which opened in early 2016 in Rock Hill and closed three years later.

Hangar’s owners are industry vet Chris Sedlak and his wife, Courtney, whose background is in bar and club ownership. To reduce costs and better control the results, the project was largely self-contracted. “If we didn’t like a finish or a technique, it was no big deal to just redo it,” says Courtney, who also designed the space. 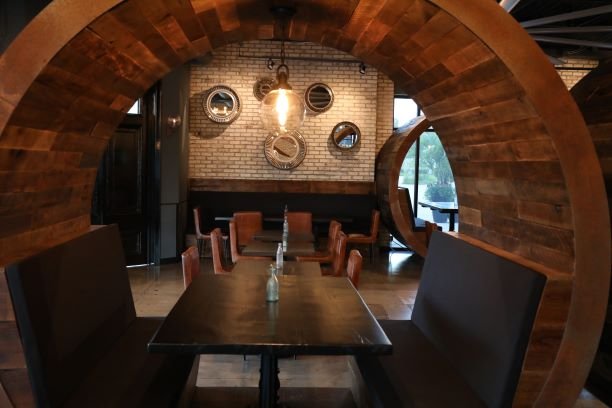 At Hangar, antique bottles, some of them blob-top soda bottles from the mid-1800s, serve as flower vases.

The couple wanted to create a restaurant that could feature an eclectic menu featuring tweaks on some of their favorite dishes that they remember from their travels, so the airplane hangar theme fit right in. “We had some pretty good ideas for focal points,” says Chris, including the restaurant’s eye-catching indoor seating: six tube-shaped booths made of slats of stained wood. The booths each seat six and are naturally socially distanced, “an unintended bonus,” says Chris. 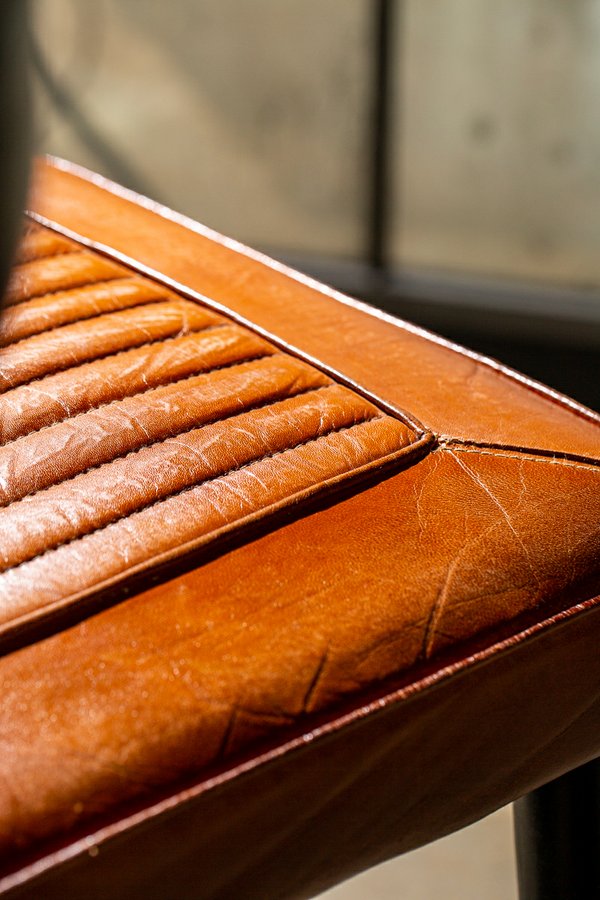 “We’d intended to open Hangar earlier this year but decided to wait for obvious reasons,” he says. The restaurant is opening with patio seating and takeout service, with limited indoor seating. “Everyone will want to sit in those booths anyway,” Courtney says, “so that part was easy.”

The dining room seats 68, where the free-standing tables have comfy leather seats meant to simulate the captain’s chairs found in an old school airplane cockpit. The same pattern was repeated on the backless barstools.

Then there’s the bar itself, which was relocated to better show it off. Made from brushed aluminum, it’s been shaped and riveted to resemble an airliner’s smooth, shiny surface.

Reservations are suggested at Hangar and accepted for the dining room, bar (both with limited seating), and dog-friendly patio. 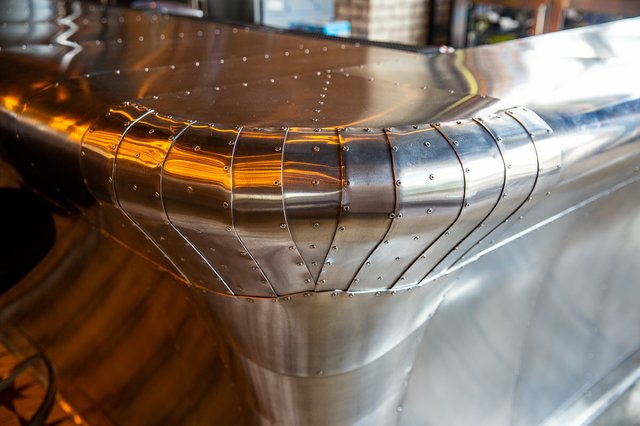 The cocktail menu, created by Courtney, features a curated list of 12 themed refreshers. The beer menu is draft-heavy (10 crafts, plus Bud Light and Stella Artois), and there are cans and bottled selections available. The 20-item wine list includes three varieties of Veuve Clicquot and Gekkeikan Plum Wine. 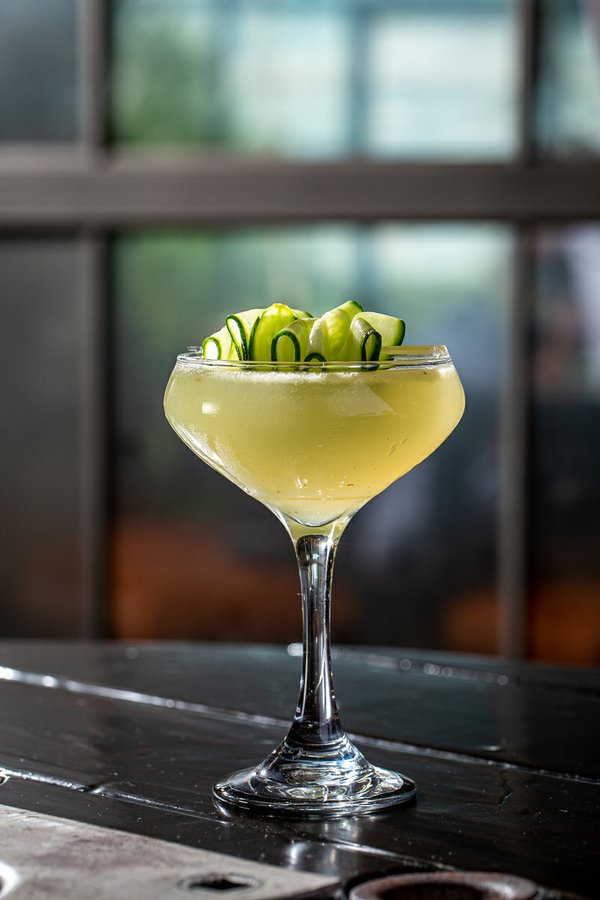 Above the bar is an old wooden propeller. On a side wall are sections of upcycled airplane windows that shine as bright as the bartop. Another wall was faced with refurbished factory windows meant to conjure the clerestory windows in an old hangar. Edison bulbs, placed at different heights, sway gently above. 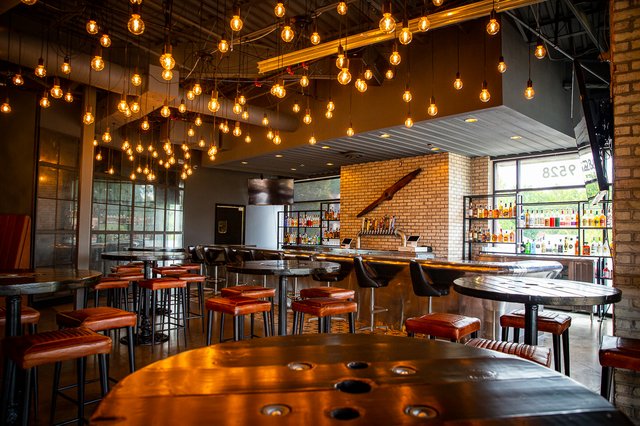 “There are so many additional things we could have done,” says Chris, “but we’re really happy with the few we chose. There are just enough to justify the theme.”

Even the existing Big Ass Fan (that’s the brand name) looks at home in the space.

The vibe that the Sedlaks were after at Hangar was “casual date night,” Chris says. “We wanted to create a comfortable place with an eclectic, approachable menu and design details that people will talk about. It’s no more complicated than that.”

The Sedlaks were able to assemble and train a crackerjack crew, led by general manager Sal Palazzo, who held the same position at The Tavern for years and more recently helped manage Bugatti’s in St. Charles. He’s assisted by Heather Straling and executive chef Jeff Davis, whose resume includes stints at Café Napoli, The Ritz Carlton St. Louis, and the Frontenac Hilton. 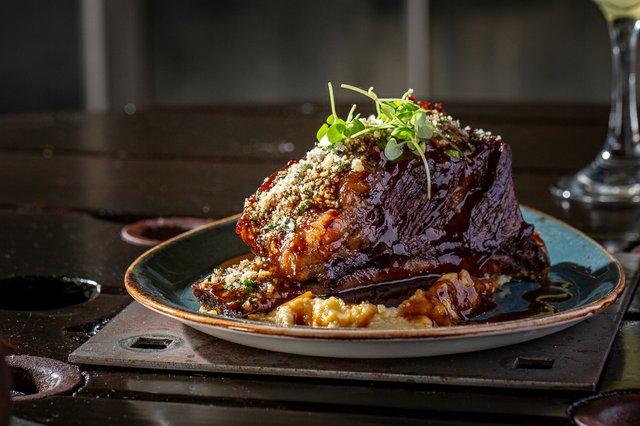 Braised short rib, with goat cheese mash, natural jus, and gremolata, is a steal at $22.

The menu (or itinerary, staying with the theme) is a combination of small and shared plates divided into five sections: Farmers Market (salads), Sushi (five different rolls), Tacos, Mains (from an $18 steak frites to a $29 tempura-fried lobster tail), and For The Table (a catch all including mini burgers, a Mexican egg roll, and lobster mac and cheese). If it reads like a random assortment of dishes, that was the intent.

“They are a lot of our favorite things, things we remember, things we crave,” says Chris. “We’re pretty sure we’re not alone.” 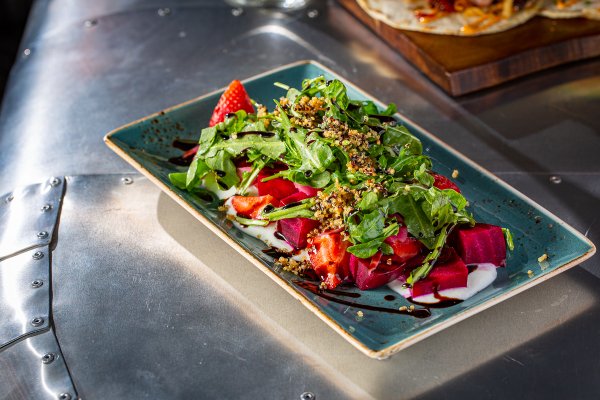 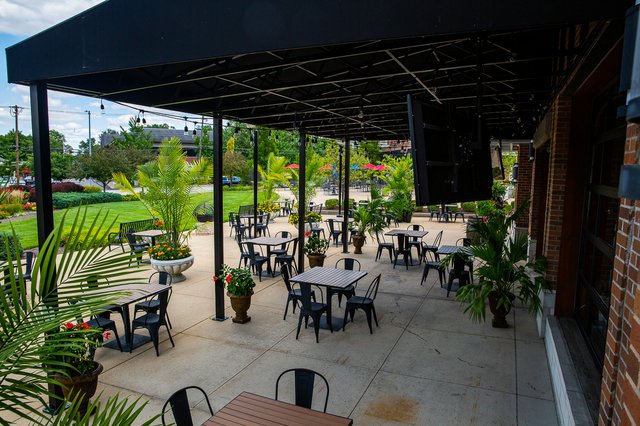 Hangar’s most obvious focal point, in the initial stages anyway, is the sprawling patio, one of the most versatile in the city. Partially obscured by plants and a fountain, its 72 seats are situated slightly above grade, an appealing to passersby. An operable, windowed garage door (OK, a hangar door) opens onto a covered portion, while the remainder of the tables are divided by large palms and tall planters. There’s even a lush green space. As summer transitions to fall, firepits will help warm the space, and there’s already discussion of converting the covered patio area to all-season dining.

“We knew that for the next couple months, the majority of the action was going to be outdoors, which is fine with us,” says Courtney. “We were lucky to have such a naturally beautiful space to make our own.”

Hangar opens today, August 7, at 4 p.m. Reservations are being accepted for inside and outside here. Beginning tomorrow, August 8, regular hours will be 4–10 p.m. Sunday through Thursday and 4–11 p.m. Friday and Saturday. 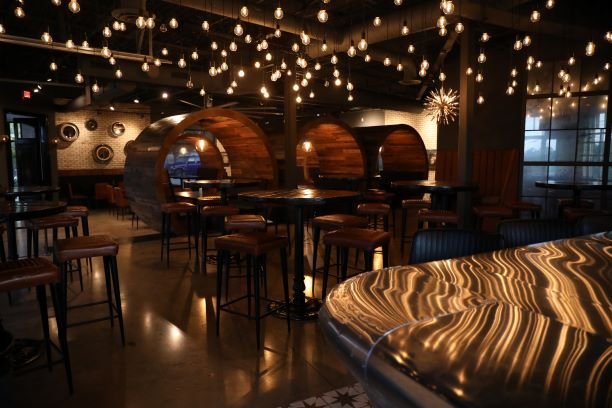